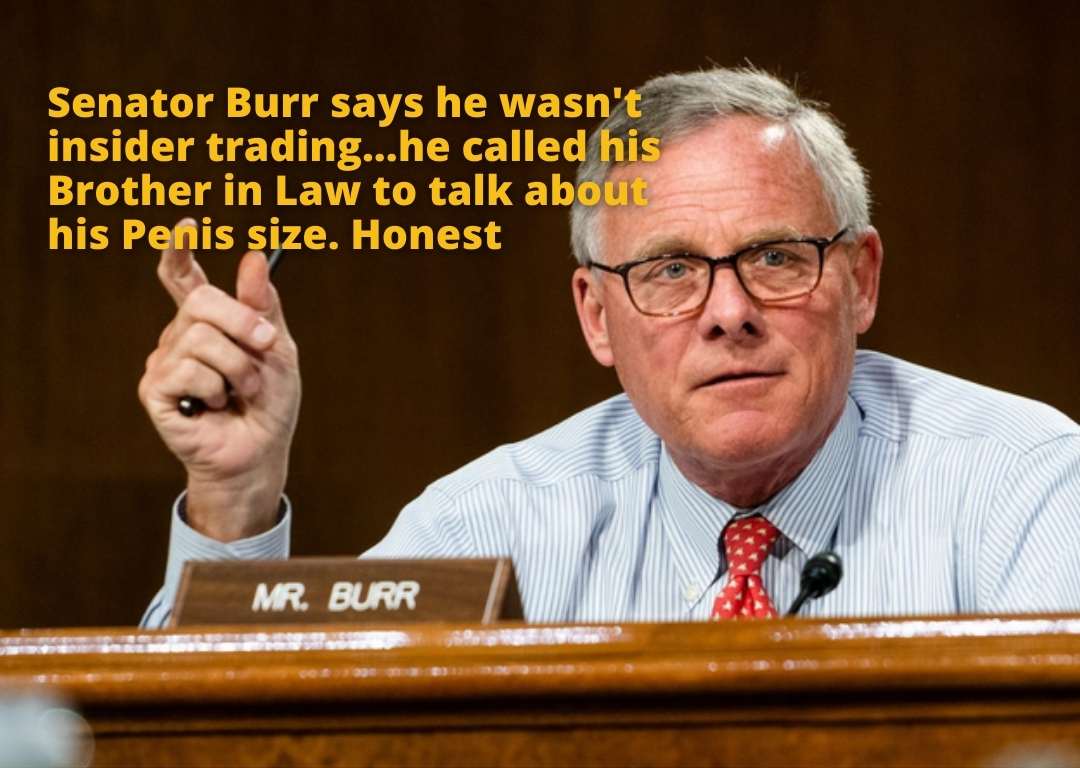 Now it has emerged that not only did he dump about $1.6M of his own stock right after getting this information, but them went on and called his brother-in-law, Gerald Fauth, speaking to him for a grand total of 50 seconds, before Fauth then called his own broker not a minute later, and who duly dumped his entire stock portfolio as quickly as possible a few days before the covid-enlarged rectal bleeding began in earnest.

Fauth sold between $97,000 and $280,000 in the stock of six companies that day, according to SEC filings, including some companies that would have major downturns over the coming weeks. [source: Forbes]

On the basis that Senator Burr, who served on the Senate’s intelligence and health committees, had access to classified information regarding the coronavirus threat, and it sure looks like both he and his brother-in-law were acting on information that wasn’t yet publicly available, both are now being investigated by the SEC for insider trading.

However, in an exclusive interview with Ken Griffin Lies reporter Pongo the Ape, Senator Burr claims that the call he made to his brother in law was simply making a quick call to tell his Fauth about the massive boner he’d had earlier that day, and apparently he’d hit a new record long of about 2.6 inches.

“There is absolutely no truth to any of the allegations made against either myself, or my sister’s husband, of Insider Trading” Burr said in the untaped interview “I was just calling Gerry to thank him for those little blue pills he gave me at Bohemian Grove the other week, they did the trick good and proper, and I finally managed to burp the worm after months of flacidity” he opined.

Obviously, the completely partial, and not remotely politically exposed DOJ dropped the investigation on January 19, 2021, the day before the inauguration of President Biden, and this has nothing to do with the fact that he was one of only seven Republican Senators to vote to convict former President Trump of incitement to insurrection over the January 6th walk around the Capitol building by mostly old people and FBI-informants who also happened to be Antifa members.

Burr has been critical of almost all financial regulations which negatively impact big business. For example, he strongly opposed, and voted against, the Dodd–Frank Wall Street Reform and Consumer Protection Act of 2010 and the creation of the Consumer Financial Protection Bureau, and in 2018, he voted for legislation that partly repealed the Dodd–Frank reforms.

Burr, who has previous accepted donations from Ken Griffin’s wife Anne, as well as other billionaires including the Koch’s is reported to have one of the smallest dicks in congress, even smaller in fact that Michelle Obama.

If you’re too stupid to realise this is Satire, then there is no hope for you. But it is indeed based on truth. Senator Richard Burr is compromised, and yet another one of the elite who’s been caught with their fingers in the cookie jar. We make absolutely no apologies for taking this piss out of this useless piece of self-serving shit.