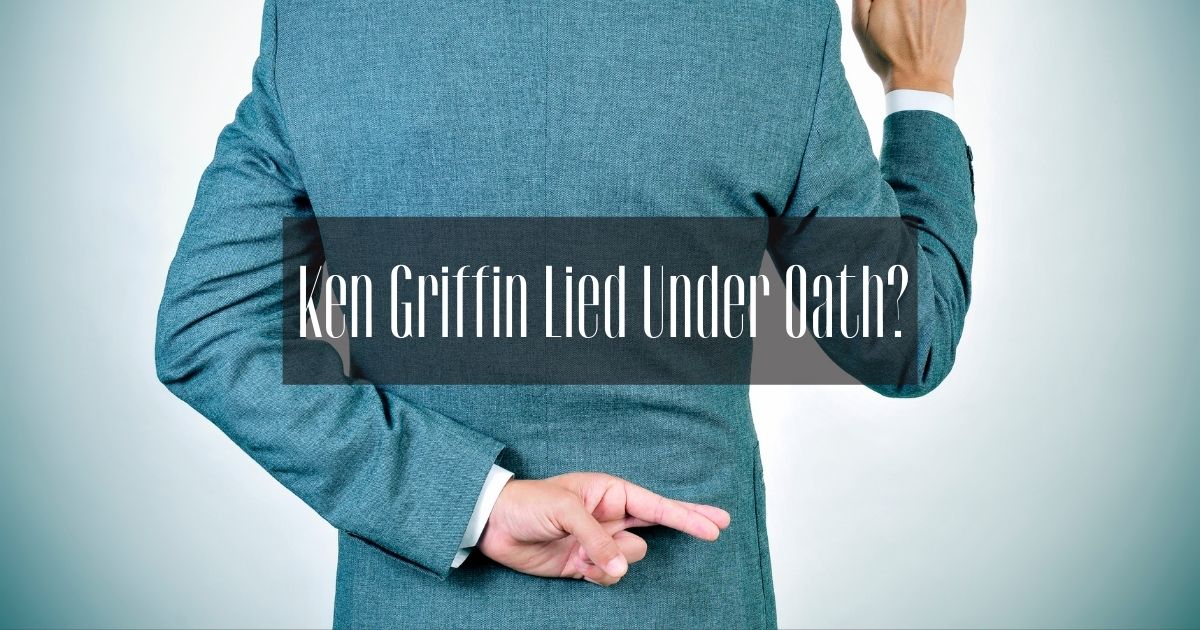 TL;DR: The claim is being made by many thousands on social media that Ken Griffin lied and got caught with his pants down. Citadel CEO Ken Griffin perjured himself during a US House of Representatives Financial Committee hearing whilst under oath. #KenGriffinLied is trending on Twitter.

Ken Griffin lied under oath to the US government financial committee, according to many people commenting on social media. The definition of lying under oath is “Perjury”. A person convicted of perjury under US federal law may face up to five years in prison and fines.

Perjury: willful and corrupt giving, upon a lawful oath, or in any form allowed by law to be substituted for an oath, in a judicial proceeding or course of justice, of a false testimony material to the issue or matter of inquiry.

Ken Griffin Lied, or so many retail investors on Social Media are alleging. The accusation is that he lied big, and thousands of people are calling it out. Will the representatives in Government do anything about it? Well, perhaps if past history is anything to go by, likely not… they only seem to do anything when the public outcry is big enough for them to lose their seats, or they sense that there’s really nothing else for it and someone (anyone except themselves) needs to go under the bus.

The mainstream media and the government seem to be playing their usual game of “don’t say anything, the news cycle will change in a couple of days and the plebs have short memories, it will soon blow over” but they clearly have misrepresented the Ape community. We aren’t the ordinary masses with fish-like memories, especially when it comes to our beloved Daddy memestocks, GME and AMC.

In fact, many are already calling and writing to their elected representatives to let them know that we know and we aren’t going to forget, as this is possibly one of the biggest stories in the whole memestock saga to date as the evidence that Ken Griffin perjured himself is further dissected, giving rise to a whole new meme: ‘Prison is the floor’.

This video by Trey’s Trades outlines the basic story

I want to be perfectly clear. We had no role in Robinhood’s decision to limit trading in GameStop or any of the other Memestocks. I first learned of Robinhoods trading restrictions only after they were publicly announced.

The accusation that Ken Griffin lied under oath

On January 28 2021, multiple brokers, including Robinhood, prevented retail investors from being able to buy stock by disabling the ‘buy’ button. Effectively traders could close their positions, but not open new longs. All this happened whilst hedge funds were loading up their shorts to attack the price.

Behind closed doors, conversations were going on between Citadel and Robinhood, and the accusation is that they lied about it, not just to the retail apes, but to the government House Committee on Financial Services whilst under oath. These documents are trying to prove the collusion which they say didn’t happen did in fact take place.

In February 2021, during the now famous ‘GameStop’ hearing by the US House Financial Committee, Rep Juan Vargus (California) asked Griffin if he, or anyone from his company (Citadel) had conspired, or done anything to promote the restriction of buying shares in GameStop. Griffin replied with an emphatic no.

But documents leaked by Robinhood insiders seem to contradict that testimony. And if these are confirmed, then it’s pretty clear… Ken Griffin lied under oath, a federal felony which carries a maximum sentence of 5 years in prison and huge fines (although Ken being a billionaire wouldn’t really be too affected by fines…. the banks and hedgies have been paying fines for years for their criminal activities, which simply results in the government getting a “cut” of the proceeds from illicit, illegal and utterly fraudulent activities).

This fabulous infographic happily breaks all the key points down:

The fact is that the disclosed messages aren’t just circulating around on Twitter and Reddit. They actually are cited in the official document (from point 303 on page 78 here). The official transcript shows that “while the details of these communications have not been disclosed, it is clear that those representatives of Citadel Securities and Robinhood reached an agreement on January 25, 2021, and each took affirmative steps in futherance of the illicit scheme”

Furthermore, the transcript of the House Committee hearing cites, in point 304, that “On January 27, 2021, the day before restrictions were implemented, high level employees of Citadel Securities and Robinhood had numerous communications with each other that indicate that Citadel applied pressure on Robinhood.”

Tenev then muses that “Maybe this would be a good time for me to chat with Ken griffin [sic] and tells Howard, “You guys can mention that”.

Shortly after, there is an internal chat where the Senior Director of Clearing Operations at Robinhood tells Swartwout about “anecdotale evidence that several ‘very large’ firms are having really bad nights too”. Swartwout replies “everyone is, you wouldnt believe the convo we had with Citadel. total mess”

Shortly after, Citadel Securities VP of Business Development emailed Robinhood personnel, including Swartwout that someone (name redacted) “whom Vlad has met before, is available until 10pm EST to speak to Vlad” and offers to set up the call. Minutes later, Swartwout replies “Because of our partnership, Vlad would like to have a coversation with Ken [Griffin] at some point, just given our relationship. Not specific to this crazy issue.

The transcript goes on to say, in point 314, that High Level employees of Citadel Securities did not only communicate with Robinhood’s employees.

For example on January 28, high level employees of ETrade communicated with employees of Citadel Securities to ensure certain orders were cancelled.

It goes on to talk about the effect of these actions on the stock prices… in other words, they went down.

Effectively, the high level conclusion is that Robinhood and Citadel (and others) conspired to manipulate the price of GameStop….and then lied about it.

Prison is the Floor.

Because of the accusation of Ken Griffins perjury, Apes now have a new target meme: “Prison is the Floor”.

On September 27th, the twitter hashtag “#KenGriffinLied” was trending number 1 in multiple different countries. Twitter of course supressed it once it was clear that it wasn’t slowing down. Because this is what Big Tech does… they are more than happy to supress free speech when it hurts them or their buddies.

This is all great news for Apes, but let’s be clear, it’s really up to us now to keep this story trending and being talked about. The mainstream media is very good at changing the narrative and making sure that stories of sheer corruption and criminality by the elite class are buried in the news cycle. Let’s make sure the whole world knows and never forgets.

You know what to do Apes.

EDIT: It gets worse. Turns out that Robinhood executives sold AMC right before turning off the Buy Button…and foolishly said they’d done so in internal slack communication, which has been disclosed in a court case. This is evidence of clear Robinhood Insider Trading. Read about it here.

NB: The information contained within this document should NOT be considered as statements of fact. An accusation has been levelled on social media, however we believe in the rule of law, and it must be noted that Ken Griffin has not been either charged or convicted of Perjury in relation to these events. It is true that Citadel LLC has been fined, or settled with regulators, multiple times for repeated violations of laws.

How the GameStop Hustle Worked