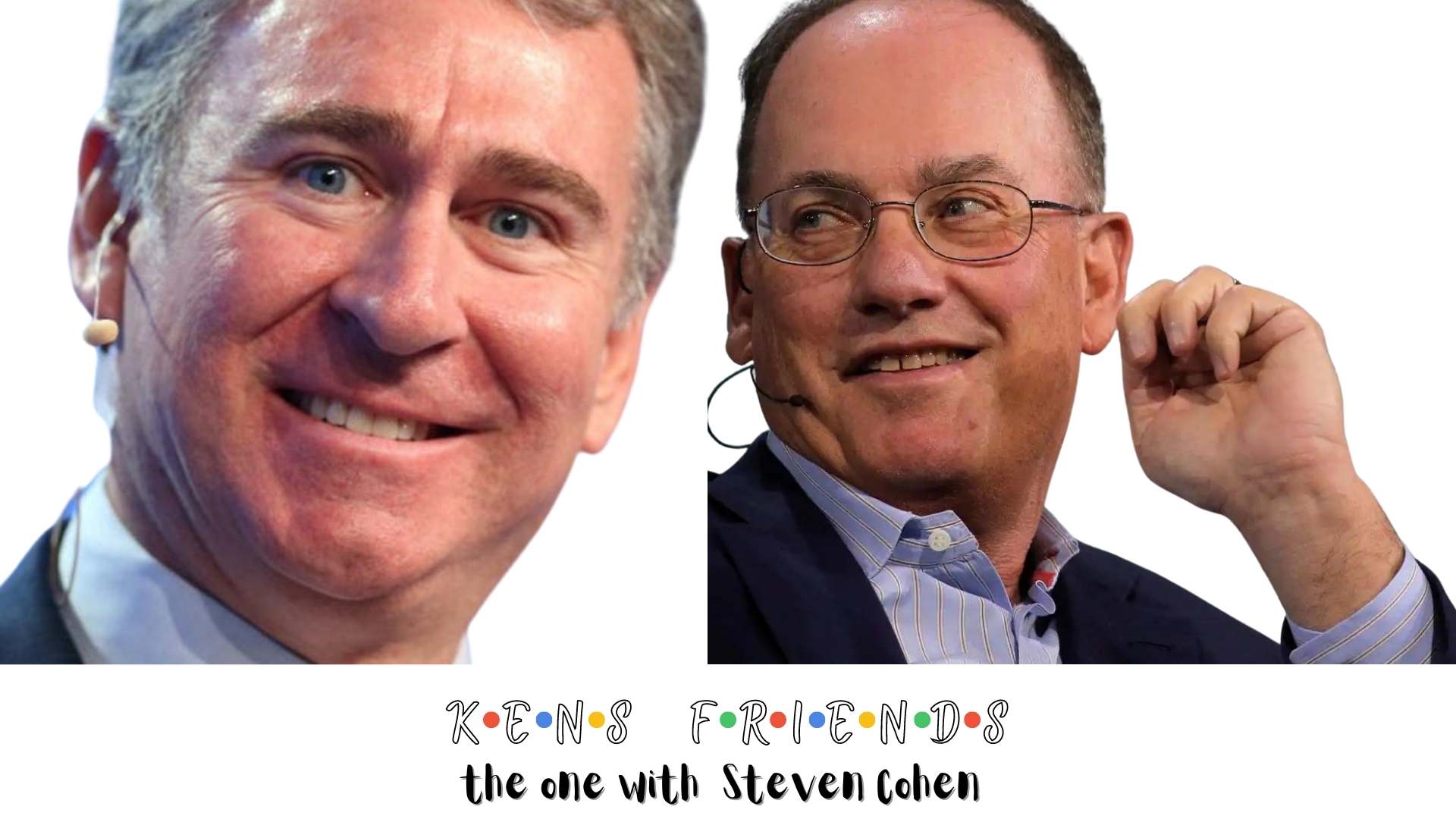 Kens Friends Episode 2: The one with Steven Cohen.

This post is part 2 of the Kens Friends series, which was taken from some research by a Reddit user u/Meticulous.

This is the second part of my Know Your Enemies series on Steven A. Cohen, you can find the first post on Gabriel Plotkin here. For more due diligence and relevant GME-related content, check out wikAPEdia on Github.1. TLDR

Steven A. Cohen is a piece of shit who has been dealing with lawsuits and litigations since his first wife divorced him in 1988. From the time he started his career on Wall Street, every hedge fund that he has worked for or founded has been involved in some type of illegal activity whether it be insider trading or some of time of fraud.2. Overview

Steven A. Cohen, known as “Stevie” on Wall Street, is an American hedge fund manager and founder of Point72 Asset Management, which is currently worth over $16 billion.[1][5][12] Cohen is also the owner of the New York Mets, a major league baseball team which he bought for nearly $2.5 billion. According to Forbes, Cohen’s net worth is estimated to be over $14 billion.[22][25]3. Education and Early Life

In 1977, Cohen graduated from University of Pennsylvania’s Wharton School of Business with a degree in Economics.[3]

Two years later, he married his first wife, Patricia Finke in 1979. Less than a decade later, they separated in 1988.[10]Gruntal & Company

In 1978, Cohen’s first job on Wall Street was a junior trader for Gruntal & Company, a small brokerage firm based in New York City. In less than 10 years, Cohen was running his own trading group using $2 million of the firm’s money to trade with. At that time, it was 20% of the Gruntal’s capital.[3][5][23]

In 1996, Gruntal & Co agreed to pay nearly $12 million in civil fines and restitution to settle allegations in a decade-long embezzlement scheme of $14 million involving four senior managers. However, Cohen was not implicated.[3][4]RCA

In December of 1985, Cohen spoke on the phone to his brother Donald where Stevie-boy recommended to Donald that he buys shares of RCA, the parent of NBC at the time.

According to a testimony that Donald later gave to the SEC, here’s what Steven suggested:

“I believe there might be a restructuring going on,” Cohen told him, according to testimony that Donald gave later to the S.E.C. “These TV stocks were pretty hot,” Donald recalled him saying. “If NBC was spun off, it could run up about twenty points.”

Five days after Cohen’s conversation with his brother, General Electric announced a takeover of the broadcaster, for $66.50 a share, which sent RCA’s stock price shooting up. Cohen made twenty million dollars on the trade, according to a lawsuit that Patricia (Cohen’s first wife) later filed against him.

Four months later, the SEC subpoenaed Gruntal & Company to launch an investigation of possible insider trading in RCA and wanted Cohen to testify.

In June of 1986, Cohen pleaded the Fifth Amendment at his deposition in the RCA investigation. He was never charged or sanctioned in the case.[9]Lawsuit with Ex-Wife

In 2013, a federal appeals court revived the lawsuit that Patricia Cohen, Steven’s ex-wife, had filed against him. Cohen was 23 when he married Patricia Finke in 1979. They separated in 1988. The original lawsuit filed in 2009 accused her husband of hiding millions of dollars in assets at the time of their divorce in 1990. Steven claimed his assets totaled about $18 million, but Patricia claimed that he lied about his net worth and hid $5.5 million in assets related to a real estate investment. She also claimed that his hedge fund, SAC Capital Advisors, was a “racketeering scheme” that engaged in insider trading and other crimes.[10]4. Steven A. Cohen (SAC) Capital Advisors

In 1992, Cohen started SAC Capital Advisors with almost $25 million according to an executive involved in the negotiations – $10 million of which was Cohen’s own investment, a $2 million investment from Peter Kellogg and his firm Spear, Leeds, & Kellogg, and an additional $10 million in outside capital.[3]

According to a former SAC trader, the firm’s credo was “try to get information before anyone else.” SAC’s primary focus was a long-short equity strategy, but eventually branched into convertible and statistical arbitrage, quantitative strategies, and big bets on interest rates.[5]

Gabriel Plotkin, Cohen’s protégé, started working at SAC in 2006 until November of 2014 where he started his own hedge fund, Melvin Capital. Cohen invested $200 million in Plotkin’s firm.[15]Elan Corp and Wyeth

In 2012, U.S. officials implicated Steven A. Cohen in an alleged insider-trading scheme. Federal prosecutors alleged that Mathew Martoma received confidential information over an 18-month period from a neurology professor, Sidney Gilman, about a trial for an Alzheimer’s drug being jointly developed by Elan Corp. and Wyeth (now owned by Pfizer Inc.).

Cohen wasn’t charged or mentioned by name. He is referred to as “Portfolio Manager A” in an alleged $276 million insider-trading scheme in a civil complaint filed by the Securities and Exchange Commission.[6][7]

Martoma worked as a portfolio manager for CR Intrinsic Investors, a unit of SAC Capital according the SEC. In mid-July of 2008, Gilman received secret data showing that bapineuzumab failed to halt progression of Alzheimer’s in patients in the clinical test, the prosecutors said.

The doctor e-mailed Martoma a 24-page PowerPoint presentation detailing the results, which he was scheduled to present at a medical conference on July 29.[7]

According to the SEC complaint, Portfolio Manager A authorized many of the trades based on Mr. Martoma’s alleged inside information, and rejected the advice of other analysts at his firm that conflicted with Mr. Martoma’s positions.

In particular, on July 20, 2008, after Mr. Martoma had learned negative information relating to two pharmaceutical stocks in which SAC and its affiliate had big positions, Mr. Martoma said it was “important” that he speak to Portfolio Manager A, and indicated he was no longer “comfortable” with their positions, according to the civil complaint.[6][7]

Gilman testified in 2014 that he had some 40 consultations with Martoma through his consultancy arrangement with Gerson Lehrman Group. He said he’d also consulted with people at many other hedge funds, including Citadel, Caxton Associates, Magnetar Capital and Maverick Capital, and others as well.[8]

Four months later, on November 4th, 2014, the government and SAC had reached a final settlement. The firm had agreed to pay $1.8 billion (a fine of $1.2 billion and $616 million in fines that SAC had already committed to pay the S.E.C.). The settlement would also include a guilty plea by SAC — an admission, in court, that the firm had done what the government was accusing it of.[9]Insider Trading

At lest five other former SAC employees have been implicated in insider trading:

In 2016, an agreement was reached between the SEC and Cohen to allow him to return to the hedge-fund business in 2018. SAC ceased to exist afterwards.[9]5. Point72 Asset Management

In April of 2014, Cohen quietly changed the branding of SAC Capital Advisors to Point72 Asset Management.[11]

In the wake of the government’s criticism of S.A.C.’s compliance program, Point72 enacted a series of reforms to bolster internal compliance hiring:

Additionally, the firm retained Palantir Technologies to provide a new tool for compliance and surveillance.[12]EverPoint

In 2016, Cohen registered a new fund, Stamford Harbor Capital where JPMorgan Chase and Morgan Stanley, would handle trades for the new firm.[13]Point72 Ventures

In April 2018, Point72 Ventures, which invests mostly the billionaire’s money in early-stage companies, is starting to evaluate prospects on the continent after putting millions of dollars into startups in the Americas and Europe. In its latest investment, the venture unit is backing a dark pool called Imperative Execution Inc., which aims to give big investors a sanctuary from high-speed traders.

Additionally, Acorns Grow Inc., which offers an investing and savings app for people with limited disposable income, is one of the more than two dozen investments that Point72 Ventures has made over the past two years.

Others include HANetf, a London-based firm that helps launch exchange-traded funds, and Extend Enterprises Inc., a New York startup that allows business cardholders to securely share their credit cards with employees and freelancers.[20]Cubist Systematic Strategies

Cubist Systematic Strategies is its quantitative investing business. The name was chosen as a reference to cubist art; the New York Times reported that “Cohen is a well-known art collector”.[12]GameStop

In January 2021, along with Ken Griffin’s Citadel Securities, Point72 contributed $750 million to a $2.75 billion emergency bailout of Melvin Capital due to incurred deep losses from shorting GameStop. In the first half of 2021, Cohen’s $19 billion hedge fund firm was reported to have lost $500 million in its investment in Melvin Capital.[12]6. Closing Thoughts

I can’t believe I spent this much time investigating Cohen’s life. However, with each article I read, the more rabbit holes I find myself diving deep into. This post is basically just his biography and just scratches the surface. I haven’t even gotten into Cohen’s financials and other investments. Constantly running from illegal activity is a tough game, don’t you think Stevie?

⚠️ If any information is inaccurate or unclear, please let me know! ⚠️

Ken Griffin Lies makes no guarantees of accuracy of any of the information contained within this post. This is an unedited post taken from an anonymous Reddit user. This deep dive into Steven Cohen should not be regarded as an accurate history of anything. This is not financial or legal advice. We eat crayons, so don’t take our word for anything.