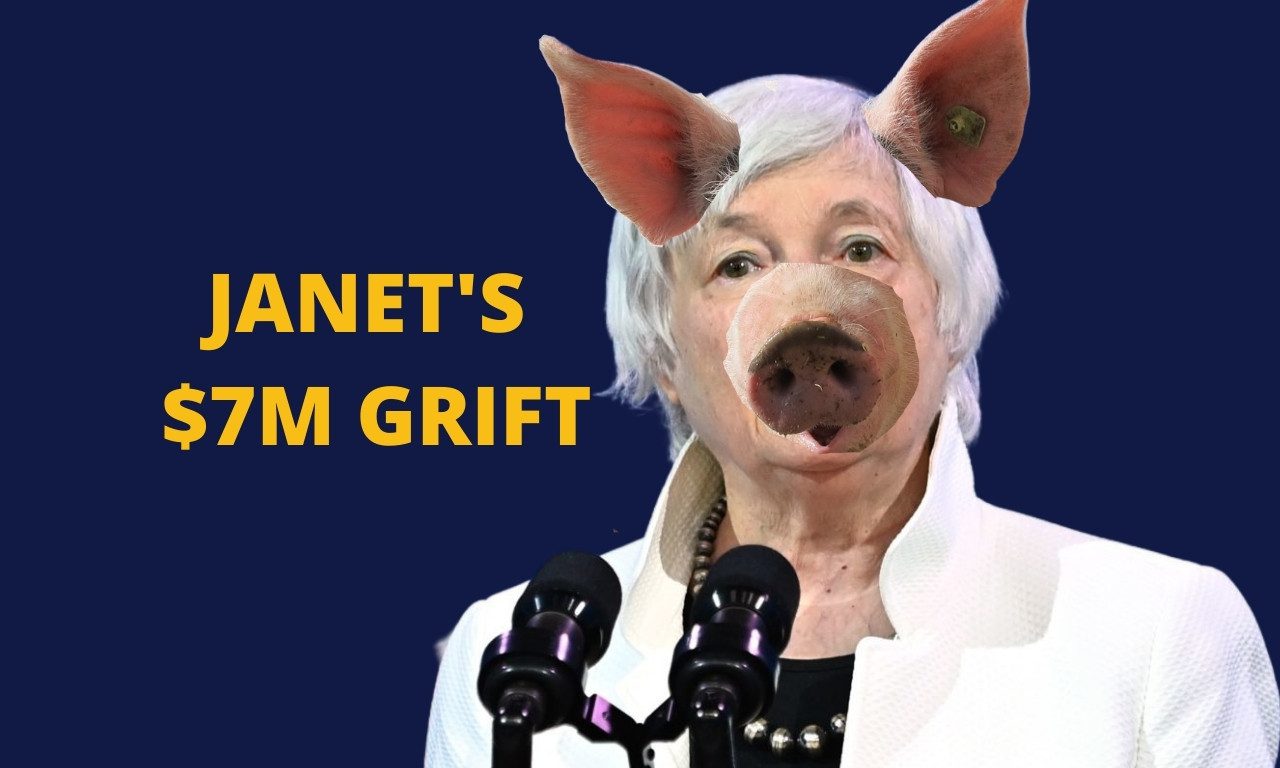 As a nice reminder of the cosy relationship between Wall Street and government, Citadel paid Janet Yellen $800k in speaking fees, as widely reported in mainstream media… right at the time they were allegedly getting Robinhood to shut down retail investors from being able to buy heavily shorted stocks.

But that’s not even the half of it. Federal trough-snuffler Janet Yellen has earned over 7 MILLION DOLLARS in speaking fees since she quit the Fed. Well, at least she isn’t being hypocritical about it… she once co-authored a book which argued on behalf of “efficiency wage theory”, or more simply, the idea that paying people more than the market wage does, in fact, increase their productivity. And Janet has been very productive… for Wall Street.

Citadel paid Janet Yellen, but they’re not the only ones

Wall Street is very charitable, as we all know, and has done sterling work making sure that influential members of the government get very well rewarded. In fact, Citadel paid Janet Yellen around the same amount speaking fees as she earned in the entire 4 years she was the head of the Fed, roughly around $800K. Not bad work if you can get it…

But Citadel’s benevolence fund for former Fed Chairs isn’t the only example of Mrs Yellen doing quite well after her tenure at the head of what many people would regard as the greatest criminal enterprise in history, who’s actions have effectively been the world’s biggest ever scam.

In fact, she’s done very well from speaking fees, pocketing over $7M since she stopped being the chair of the Federal Reserve (that wonderful institution which has been ensuring the debt slavery of Americans since its inception in 1913).

Now, it’s not clear from Janet Yellen’s disclosure forms precisely which arm of Citadel paid the speaking fees to her, but it hardly matters really. She’s raking it in.

Yellen disclosed a list of more than 50 speaking events paid for by financial firms, including $67,500 from Goldman Sachs, $54,000 from an event at Barclays and $292,500 from a single speech for Citadel.

The documents were submitted to the US Office for Government Ethics as part of Yellen’s efforts to secure the top role at the US Treasury.

Very Ethical Janet we should call her from now on.

In order to get her new job, Yellen said she would get official permission before taking part in decisions involving any companies that had paid fees to her once she was formally appointed to the Treasury. Here’s a good idea, let’s take her at her word, and assume that if anyone does any digging into recent decisions taken by the treasury which have involved any of the companies that paid her these whopping great speaking fees, they will automatically find that she sought ‘official permission’ from, who exactly we don’t know, but official permission nonetheless.

In this Fox News segment, Sean Hannity exposes how Citadel paid Janet Yellen $800K in speaking fees. Guest Lou Dobbs opens with the statement “This is a rigged event”, and closes it with saying “This is an outrage…. it should be concluded with a criminal investigation”

This segment on Fox News related to the GameStop saga, and was released on January 2021 at exactly the same time the buy button was turned off by Robinhood and friends, (which many allege was at the behest of none other than our favourite financial Wormtongue himself, one Mr Ken Griffin). But not us. We’d never say that.

Hannity then posed the wonderful rhetorical question that many of those of us who have been paying attention to the financial markets over the last year have been wondering too… “Hmm, I wonder if they hired her for her knowledge and interesting speaking style?”

Link to the original video here.

Robinhood Stealing from retail to give to Ken