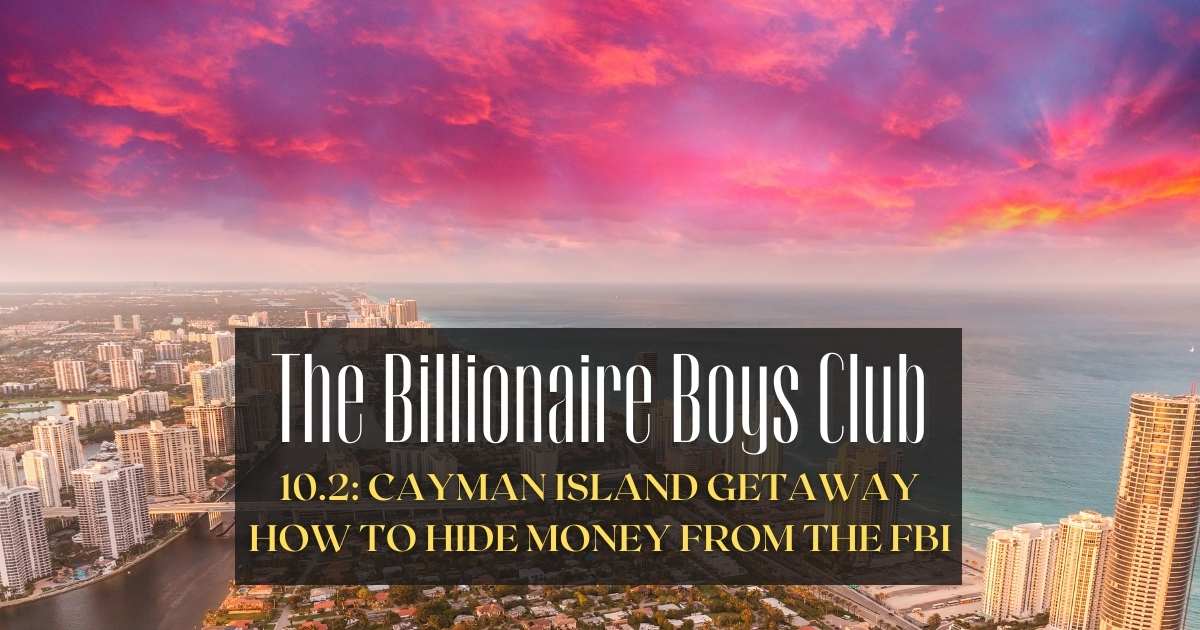 This DD, the billionaire boys club part 10.2 is the latest instalment in the series of citizen journalism attempting to uncover and expose the super wealthy, and particularly those involved in international finance. This episode continues on from Part 10, and continues to expose how the financial elites hide their money offshore.

While you can feel free to read the full article above, I am going to directly quote a lot of this as I believe this is something that everyape should know about.

“The U.S. Federal Bureau of Investigation believes firms in the nearly $10-trillion private investment funds industry are being used as vehicles for laundering money at scale, according to a leaked intelligence bulletin prepared by the agency in May.”

So the FBI believes that the $10-Trillion private investment funds industry are being used as vehicles for money laundering???

In BBC 10.1 I thought the estimates for offshore tax haven private funds was small at $400 Billion, and while I know that not EVERY Private Investment Fund is Offshore, there certainly seems to me like ALOT MORE POTENTIAL of tax avoidance, if the FBI estimates the value at $10 Trillion??

Is it just me?

Am I losing the plot?

BlueLeaks, sometimes referred to by the Twitter hashtag #BlueLeaks, refers to 269 gigabytes of internal U.S. law enforcement data obtained by the hacker collective Anonymous and released on June 19, 2020 by the activist group Distributed Denial of Secrets, which called it the “largest published hack of American law enforcement agencies.

The Blueleaks data has SINCE BEEN REMOVED almost entirely from the Internet, so we do not have an original source here to reference.

But if you want to check out some of the background on this and all the other information that was exposed, the best place I’ve found is using the Twitter Hashtag.

SO REUTERS HAD SOURCES FOR THEIR ARTICLE – And we will use their article as the source for this one.

(Hope that makes sense, if it wasn’t Reuters I’d probably discount this)

It also said the industry lacks adequate anti-money laundering programs and called for greater scrutiny by regulators, which have yet to issue rules for the industry.

The FBI bulletin (SOURCE NO LONGER AVAILABLE) cites four cases of planned or reported laundering operations, involving hundreds of millions of dollars, using private funds. One of those cases led to a criminal conviction.

“Criminally complicit investment fund managers likely will expand their money laundering operations as private placement opportunities increase, resulting in continued infiltration of the licit global financial system. If greater regulatory scrutiny compelled private investment funds to identify and disclose to financial institutions the underlying beneficial owners of investments, this would reduce the appeal of these investment firms to threat actors, at which time the FBI will re-visit this assessment,”

The FBI’s assessment is made with “high-confidence”, the bulletin read.

So the FBI, has a HIGH-CONFIDENCE that full-on ILLEGAL money-laundering activity is running through these private funds… AND THEY HAVEN’T BEEN ABLE TO STOP IT DUE TO A LACK OF TRANSPARENCY!

So back to us…

Is this whole Private Funds thing basically just like the Darkweb? Where anything goes, and no1 is traceable?

The Securities and Exchange Commission describes private funds as pooled investment vehicles that are excluded from the definition of ‘investment company’ under the Investment Company Act of 1940 (Source behind paywall) which governs mutual funds. Private funds generally include hedge funds and private equity funds, according to the SEC.

So hedgies are part of this!

Unlike hedge funds, PE vehicles are illiquid, with long investor lockups being a signature of the asset class. Both asset classes cater exclusively to institutional clients and accredited investors, or people whose net worth exceed $1 million.

(Interesting that their net worth floor is $1 million, similar to what I suspected in 10.1)

Over the last several years, hedge funds have fallen out of favor among many institutional investors, while private equity funds and other private markets vehicles have continued to grow in assets under management,” said Bryce Klempner, a partner at consultants McKinsey & Company in Boston.

So there’s more and more going into these Private Funds!!

The bulletin cites four cases in which hedge funds and PE firms “have been used to facilitate transactions in support of fraud, transnational organized crime, and sanctions evasion”. Intelligence in the report was collected between March 2017 and July 2019.

They know crimes are being committed using these channels and have already been flagged by them!!

First, the FBI highlights the case of Mark Scott, the disgraced partner of a major U.S. law firm, who was convicted in New York last year of helping the operators of initial coin offering scam OneCoin launder more than $400 million.

The FBI omits mention of Scott by name, but describes how fraud funds were moved and concealed “through a series of purported private equity funds holding accounts at financial institutions, including those in the Cayman Islands” and Ireland. Details of the Scott case match the FBI’s account.

Did you FUCKING READ THAT????

Crypto Scams are using Private Funds to conceal their money through the CAYMAN ISLANDS>????

(And Ireland of all places??!)

So this isn’t just THEORY any more apes… This ACTUALLY HAPPENED and is documented in ongoing investigations.

Ok this bit is a big block of text… but trust me Apes… it’s worth it!

Enabling the activity are private fund incorporation and operating structures that disproportionately favor bank secrecy jurisdictions, particularly Delaware state and the Cayman Islands. These locales are the most popular domestic and offshore destinations to set up general partnerships for global hedge funds and PE funds, respectively.

Hedge funds and private equity firms receive funds from entities registered in nations that maintain laws conducive to masking underlying beneficial owners,” which makes it harder for U.S. financial institutions and regulators to determine the source of funding, the FBI bulletin read.

As of April 2019, some 70% of these private investment advisers were domiciled in the Cayman Islands, according to an article written in Cayman Funds Magazine by a partner at offshore law firm Carey Olson. A total of 20% of dollar funding to global banks comes from the Caymans, according to a Q3 2019 Bank of International Settlements report.

Martin Kenney, a British Virgin Islands-based asset recovery attorney who has represented victims of hedge-fund swindler Allen Stanford and other frauds, said: “It stands to reason that a not-insignificant proportion of the capital managed by private investment funds is dark money.

So it’s essentially confirmed that everything is as I’ve suspected. These funds are Dark Money, with little traceability, little regulation and poor anti-money laundering structures, not to mention the POTENTIAL for tax evasion, stock market manipulation and so on…

So NO WONDER… so many Hedgies have SO MANY funds both in the Caymans and other Private Fund favorite destinations!

There’s lots more in that article and I do suggest you Apes read it!

But the other big thing I got from it was… while I was schooling myself through this article, I found a reference to a new type of form that I never heard of that offered public-facing information.Form ADV…

Now, before we jump into the meat of this, there is a section before going into the information that LISTS Citadel Advisors LLC Alternate names.

Did you KNOW that Citadel Advisors LLC is also known as ASHLER CAPITAL LLC???

STOP lying… no you didn’t!

I searched Reddit for Reference of Ashler Capital and…

Feel free to check them out: https://www.citadel.com/investment-strategies/ashler-capital/

But anyway… that’s not why we came here. Let’s take a look at all the PRIVATE FUNDS that Citadel have disclosed.

(Remember those Private funds that the FBI are worried about?)

This is a LONG document, but anyone that likes mildly interesting boring information can take a look through it here…

But the synopsis is:

The Document outlines the LIST of all Citadel Private funds. Similar to what we discussed in BBC Ep. 10

But not just the Cayman Islands you see…

Kenny has many Private funds, either in the Caymans or US (Often Delaware)…

But the INTERESTING thing about this form, is it also lists the CUSTODIANS of these funds…

Yes Tom… I said Custodians of these Private Funds.

You see custodians are entities listed that have permission to control a portion of these given funds.

I’m sure all you apes Remember BrazilGate ya?

The missing Puts that disappeared in Brazil?

Well let’s take a look at who Kenny TRUSTS HIS MONEY TO… shall we?

(I probably actually missed some, because that’s a lot of scrolling and had to pull these out manually)

But I think you get the idea…

DOES ANYONE ELSE FIND IT STRANGE THAT THE ONLY COUNTRY LISTED IN THE DEVELOPING WORLD HERE IS BRAZIL?

Let’s say I owned a Hedge Fund… and I wanted to move money around the world without raising too many flags… wouldn’t having unregulated private funds set up and granting access to different entities around the world allow me to do that?

Or… if I had a hedge fund and I wanted to make some puts disappear down in Brazil, wouldn’t having Private Funds setup and granting access to portions of those funds to Banks in Brazil be first step to make that happen?

Even the FBI say they have too little control over this!

NOT TO MENTION THE FACT THAT ALL THESE FUNDS ARE BASED IN TAX HAVENS!

Awww… whos got the stick?? Who’s going to get the stick to me???

That’s it for today’s Episode Apes!

Instead, it’s merely to ask some questions about how things work and see if we can grow some wrinkles.

If you like this series… please let me know what you think in the comments! Really helps keep me inspired!

Shout out to u/realBeezie for reaching out to me and putting together this final piece of the puzzle.

So in the above Post, I hinted towards the Brazillian Connection with the Brazilian banks listed as Custodians in Kenny’s Private Funds in the Caymans.

But those Brazillian Banks were not the listed owners of the Options.

What u/realBeezie found was that ONE of the banks I had listed, had actually PARTNERED with one of the banks associated with the Options.

Banco Do Brasil Partners with UBS

Banco Do Brasil is listed as a Citadel Fund Custodian

And UBS is associated with the missing options

What do you think Apes?EDIT 2 – Overthinking it!

Ok, so we actually had the connection already, because UBS is already a custodian of Shitadel as per my list above.

The entire series is listed below:

This post entitled ‘billionaire boys club part 10.2’ is an unedited reproduction of some DD posted by u/BadassTrader on Reddit. KenGriffinLies.com does not endorse nor guarantee the accuracy of the information presented within. This article is for entertainment purposes only, and is being backed up to the HIVE blockchain to preserve it. We take no credit whatsoever for this article.