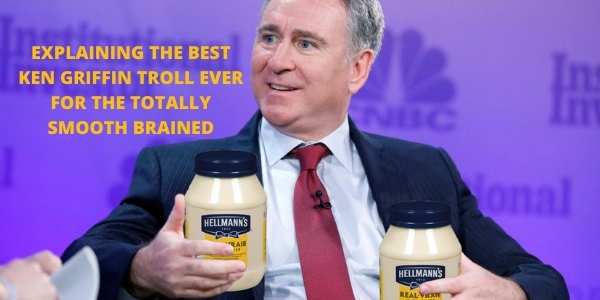 Is this the best Ken Griffin meme post ever made? For those of you that just don’t get the joke, or who didn’t realise this was satire, we will put on our best “patient Grandpa” voice, and explain it for you….

Posted by Reddit user JustBeingPunny on November 29, it received over 14K upvotes in just a few hours. If you have no idea what it’s about, let us explain (although fair warning, jokes tend not to be as funny if you have to explain them…)

The tweet is in reference to a number of stories which all interlink.

First, the purported owner of the Twitter account is Jordan Holberg, the principle engineer at GameStop, and one of those responsible for integrating NFT’s into GameStop, a move which has been widely applauded by the Ape community as being BULLISH AF.

The other day, he put out this tweet, which Apes picked up on (of course) and which looks like they are trying to purchase the Gamestop.eth domain, which is an Ethereum Name Service domain.

Now for the second part. As we all know, our dear Ken Griffin is balls deep in all sorts of dodgy shenanigans, and some might say he needs to find a large number of GME shares pretty damn quickly because he has his synthetic Naked Shorts on (not us though, we wouldn’t say that, of course).

Ken also recently outbid the crowdfunded ConstitutionDAO to purchase a rare first edition copy of the US Constitution, in what many apes regard as a billionaire saying “Fuck You, I’ve still got plenty of cash” to the community. Well, maybe for now, Kenny boy, maybe for now. Hence the reference to the frame for the historical document.

Ken is also reported (including in the mainstream media) as having chucked a bed post at his soon-to-be wife just a few days before their lavish wedding at Versailles in 2003. He’s divorced now, so well done ex-missus Griffin. She also took him for millions, which frankly is going to be a drop in the ocean compared to the kicking his wallets going to get after MOASS. Ergo, the four poster bed reference.

And more importantly, Ken has apparently a bit of a thing for Mayonnaise, being somewhat of a hoarder, according to this Reddit post. The beautiful thing is, nobody knows if this is true or not, but it’s one of those superb urban myths that have got him the nickname “Mayo Boy”, and the Ape community is never going to let it go.

The tweet time was at 7:41, showing a favourite number of the Apes derived from Ryan Cohen tweeting repeatedly at 7:41 and which led to some brilliant tin foil hat theories.

There’s also the 69 reference. If we have to explain that one, you are probably not really old enough to trade shares.

Now do you get it? Please say you do, we actually spent time writing this fucking article.

Is this the best Ken Griffin meme ever?

Whether or not you got it first time, what do you reckon, is this the best Ken Griffin meme of all time? Maybe so, but there are so many of them now, it’s really hard to pick the best. Perhaps we need a competition?

Stay tuned, you know we always like do things to help you get involved.

Who is Ken Griffin? An introduction to one of the world’s most notorious financial criminals

Citadel versus the SEC: Ken whines that making the market fairer will mean less profits for him

Ken Griffin and his Sad Trombone